Skip to content
Free Shipping: Orders Over $500 Mainland US*

From NYC to the Heartland: The story of a Classic American.

Norman Rockwell was born in New York City on February 3, 1894.  Talented at a young age, he received his first commission at age 17.  Rockwell was so intent on pursuing his passion that he dropped out of high school and enrolled at the National Academy of Design.

By 1916, a 22-year-old Rockwell had painted his first cover for The Saturday Evening Post—the beginning of a 47-year relationship with the iconic American magazine.  In total, he did 321 covers for The Post including Lindbergh’s crossing of the Atlantic in 1927.

The 1930s and 40s proved to be the most fruitful period for Rockwell.  Rockwell’s success stemmed to a large degree from his careful appreciation for everyday American scenes, the warmth of small-town life in particular.

“Without thinking too much about it, I was showing the America that I knew and observed to others who might not have noticed.”

In the final decade of his life, Rockwell created a trust to ensure his artistic legacy would thrive long after his passing. His work became the centerpiece of what is now called the Norman Rockwell Museum in Stockbridge. In 1977—one year before his death—Rockwell was awarded the Presidential Medal of Freedom by President Gerald Ford.

Norman Rockwell died at his home in Stockbridge, Massachusetts, on November 8, 1978.

On Jan 6th, 1941, President FDR delivered State of the Union Address. His intention was to gather support for the ally troops in WWII. Americans at that time were generally isolationist, and wanted nothing to do with the problems of the World. They felt that the huge Atlantic Ocean was their protection from becoming entangled in another war. They didn’t want to be involved in the horrors of war already experienced in WWI.

2 years later in 1943, Rockwell was mulling over some ideas for new illustrations regarding the war efforts. One night, Rockwell attended a Town Hall meeting where a man stood up and voiced a fairly unpopular view. That night, Rockwell realized that he could best exemplify these four freedoms by showing everyday Americans simply exercising their rights.

After unsuccessfully pitching the Department of Ordnance, Rockwell decided to stop by Curtis Publishing Company, publisher of The Saturday Evening Post, and showed his sketches to editor Ben Hibbs.

Hibbs immediately made plans to use the illustrations in the Post.

From there, the rest is history. According to the Norman Rockwell Museum: “The illustrations were a phenomenal success. After their publication, the Post received 25,000 requests for reprints. In May 1943, representatives from the Post and the U.S. Department of the Treasury announced a joint campaign to sell war bonds and stamps. They would send the Four Freedoms paintings along with 1,000 original cartoons and paintings by other illustrators and original manuscripts from The Saturday Evening Post on a national tour.

Traveling to sixteen cities, the exhibition was visited by more than a million people who purchased 133 million dollars in war bonds and stamps. Bonds were sold in denominations of $25, $100, and $1,000, and each person who purchased one received a set of prints of the four paintings.”

VintagePosters.us happens to have in our possession the extremely rare, large format set (each poster is Approx 40″ x 56″) and is available here. 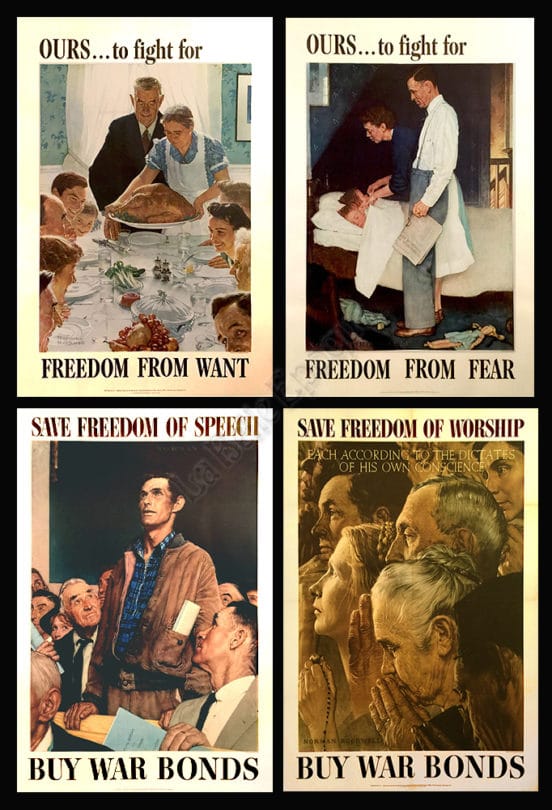 Freedom of Speech
by Norman Rockwell

“The first is Freedom of Speech and Expression everywhere in the world.”
-FDR 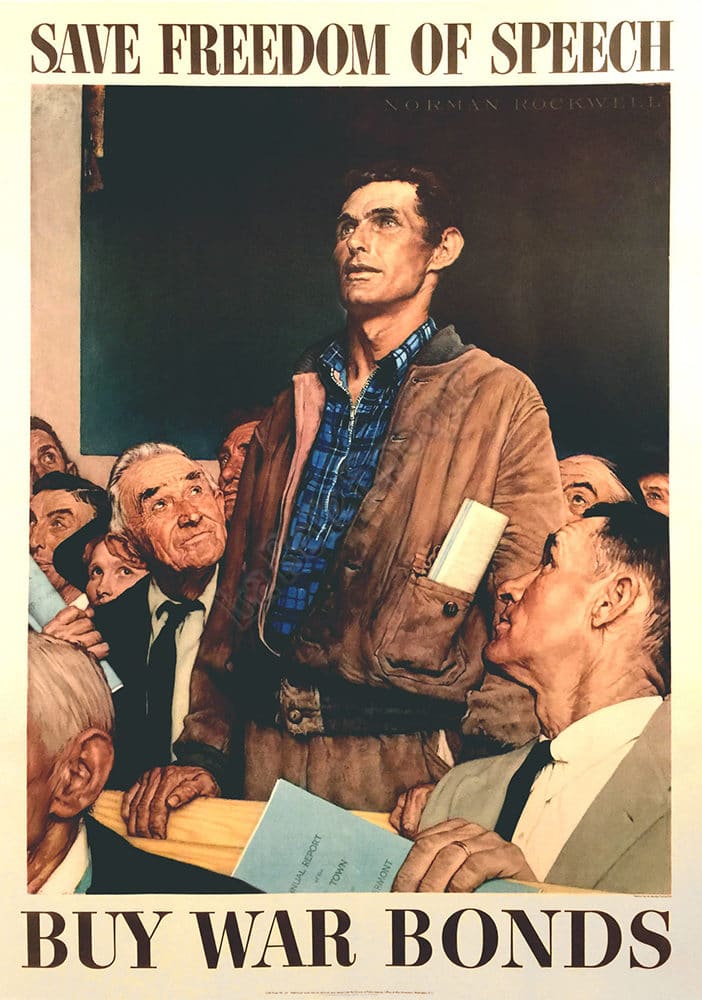 Freedom of Worship
by Norman Rockwell

“The second is the Freedom of every person to Worship God in his own way – everywhere in the world.”
-FDR 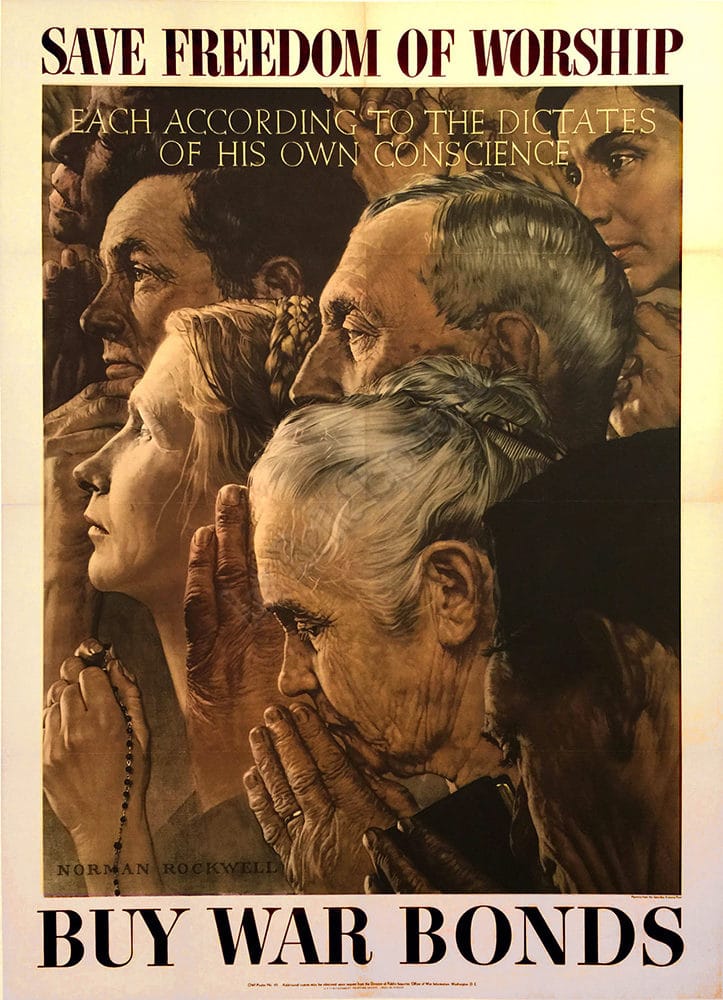 Freedom from Want
by Norman Rockwell

“The third is Freedom from Want – which, translated into world terms, means economic understandings, which will secure to every nation a healthy peacetime life for its inhabitants – everywhere in the world.“
-FDR 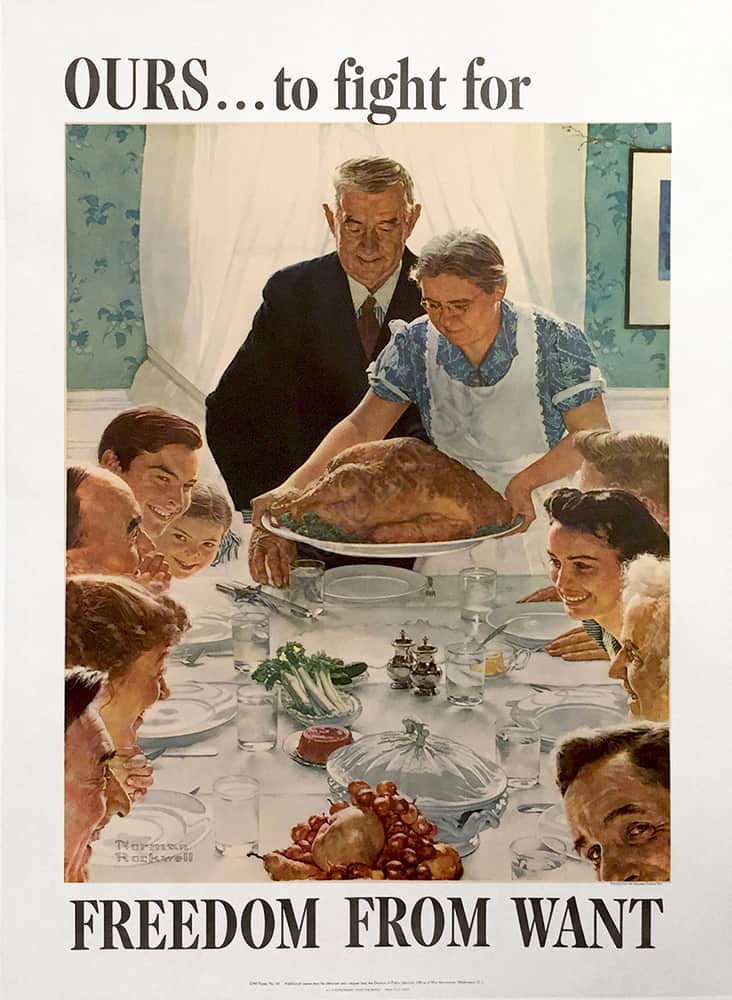 Freedom from Fear
by Norman Rockwell

“The fourth is Freedom from Fear – which translated into world terms, means a world-wide reduction of armaments to such a point, and in such a thorough fashion, that no nation will be in a position to commit an act of physical aggression against any neighbor – anywhere in the world.”
-FDR 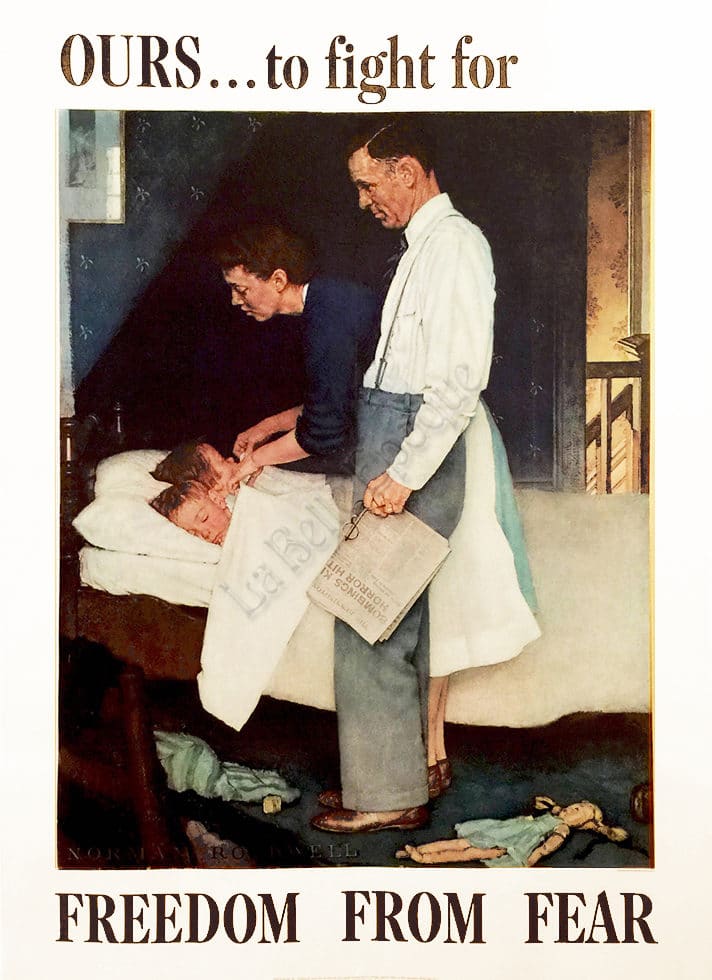