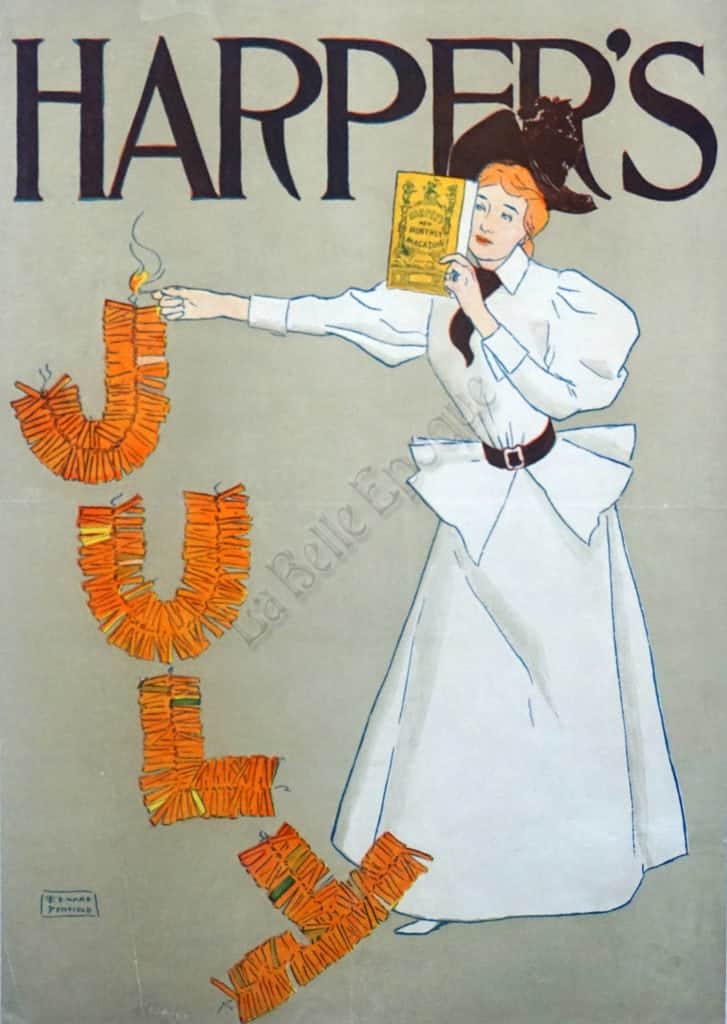 This is a rare poster for Harper’s July created by Edward Penfield in 1894. This is an excellent example of the way in which Penfield’s work was inspired both by his French contemporaries, such as Jules Cheret and Henri de Toulouse-Lautrect, and Japanese woodblock prints. This lithographic image features a woman dressed in a smart white dress with a brown hat, belt and scarf standing on the right hand side of the image. In one hand she is holding a magazine, which she appears to be reading, and in the other she is holding a burning match up to a bundle of firecrackers that are on the left hand side of the image. These firecrackers compose the word “July,” in bold orange color. The rest of the image features “Harper’s” in its iconic typography, mirroring the same brown of the woman’s hat.

Edward Penfield is considered to be the father of the American Poster, and was a leading American illustrator during what scholars refer to as the Golden Age of American Illustration. His use of simple shapes, limited color palettes, and boldly outlined figures allowed his posters to pop from a distance with great clarity. His poster designs strongly contributed to the evolution of graphic design.

Harper’s Magazine began as a monthly magazine of politics, literature, culture, finance and the arts; it was created by the New York City publisher Harper & Brothers in June 1850. Harper’s is the second-oldest continuously published monthly magazine in the United States. The early issues of the magazine featured English authors such as Charles Dickens and the Bronte sisters, and later, Americans such as Woodrow Wilson and Herman Melville – just to name a few of the celebrated contributors.