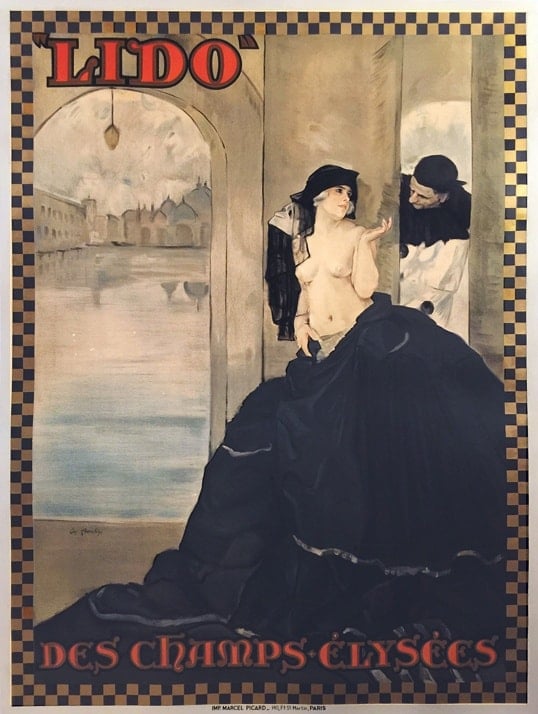 This is an extremely rare French Art Nouveau period poster by the Italian painter Carlo Cherubini, made for the private club Le Lido des Champs-Elyseés in Paris. This is an exquisitely crafted image that shows a part of a scene that was created for a panel in the club painted by Cherubini, depicting the Carnevale of Saint Margherita in Venice. The panels Cherubini created, as well as the poster, recalls the masters of Venetian 18th century painting.

This scene features a simple yet exquisitely crafted scene of a partially dressed woman standing in the foreground, behind an archway. She appears to be speaking to a man who is peeking out from behind the other side of the archway. In the background, on the left-hand side of the image, you see a picturesque view of Venice. Cherubini uses an almost tactile sense of color, the velvety black gown that is falling off of the woman matches her hat, that is both full of reflection and transparency, alluding to the works of Venetian masters.

The critic Paul Sentenac underlined the impressive nature of Cherubini’s ability to operate over large areas, as seen in the panels of the Lido. The panels of the Lido are no longer in the cabaret hall; this poster is one of the last relics of the beauty and mastery that Cherubini created of a rare blend of past and present.

Le Lido des Champs-Elyseés, designed by René Félix Berger, and was inspired by the Lido of Venice. It brought the amenities and style of the Venetian beach resort to the center of Paris, including a swimming pool area, a marble bar, ladies and men’s dining areas, gaming rooms, Turkish baths, and a beauty parlor. Interestingly enough, the architecture and central pool was designed to mimic the appearance of a Venetian canal.

Le Lido was patronized by European royalty, artists, and others, and had nightly performances that included diving demonstrations and aquatic tableaux. Le Lido still exists today in the same location, although its interior has since been renovated.

In 1946, the salon/social pool transformed into a cabaret, and the passage became known as the Arcades of Lido.